A Wilderness Science and Art Collaboration

Aldo & Leonardo, a partnership between Colorado Art Ranch and the Aldo Leopold Wilderness Research Institute, is a project to celebrate the 50th anniversary of the Wilderness Act. The project is inspired by the scientific wisdom of Aldo Leopold and the artistic genius of Leonardo da Vinci. Our endeavor is an interdisciplinary collaboration of artists and scientists designed to celebrate the lands, resources and opportunities protected by the Wilderness Act. In 2013, we are hosting one-month residencies in six diverse wilderness areas. Artists will work alongside wildland research scientists and gain firsthand knowledge of the wonders, complexities and challenges of our nation's wildest places. The result will be a body of work that creatively illustrates the value of wild areas and honors the scientific efforts to preserve wilderness for the next fifty years.

The relationships that exist within the natural world inspire me. A large part of my studio practice is exploring the materiality and transformative properties of plants, specifically I investigate invasive plants and their impact within the ecosystems they are invading. The first day I arrived on Cape Cod I encountered Codium fragile, commonly known as "Deadman's Fingers" or "Green Fleece".  It is native to Pacific waters and was accidentally introduced to the Atlantic Coast in 1957, most likely from international shipping traffic.  Part of the success of this plant's population boom is due to the fact the dominant herbivore in these waters, the Green Sea Urchin, does not prefer to eat it. MIT Marine Bioinvasion Fact Sheet  As you can see below this plant dominates shorelines here in Chatham, washing up in heavy ropey masses.  It's negative impacts on the ecosystem include choking out important native species such as eel grass, thus displacing marine fauna such as oysters and clams that inhabit the eel grass beds. 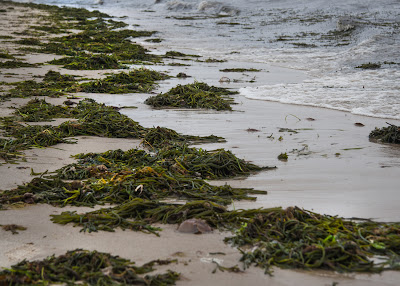 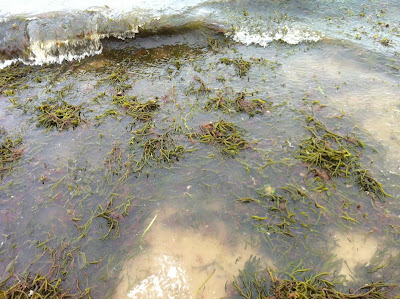 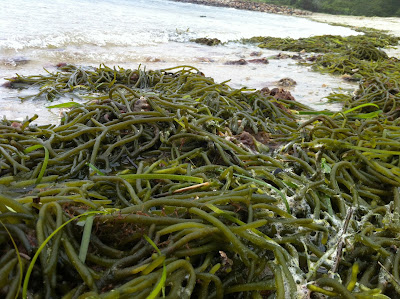 The papermaking process for me begins with exploring sites that are being affected by invasive species and collecting plants.  The images above are from Cockle Cove in Chatham, MA.  The following images and heading will outline the process I used to create paper from these plants.


Posted by Megan Singleton at 9:39 AM